Introduction: The present research aimed to compare and follow-up the effect of 8-week corrective exercises with and without the myofascial release on functional kyphosis deformity in young adults.
Methods: It was a randomized controlled trial in the university laboratory. Forty-five male students suffering from abnormal hyperkyphosis deformity (kyphosis of more than 42°) were selected and randomly assigned to three groups: corrective exercises, combinational exercises (corrective and myofascial release), and control. The Mean±SD age, height, and weight of the study sample were 22.12±2.88 years, 175.44±6.80 cm, and 71.21±7.31 kg, respectively. The study groups did the exercises for 8 weeks, under the direct observation of the researchers. The kyphosis angle of the participants was measured using a flexible ruler, at the baseline, post-test, and follow-up (4 weeks after the end of the exercises) stages. The collected data were analyzed with repeated measures Analysis of Variance (ANOVA) and Analysis of Covariance (ANCOVA) tests.
Results: After 8 weeks of exercises, the degree of kyphosis in the post-test and follow-up stages was significantly lower than that in the pre-test, in both training groups. The results of the ANCOVA test demonstrated that the thoracic kyphosis degree in the combinational exercises group was significantly lower than that of the corrective exercises group (P≤0.05), in the post-test and follow-up stages.
Conclusion: According to the results, the corrective exercises program in combination with the myofascial release is more effective than the corrective exercises alone, in correcting the thoracic kyphosis deformity.

Introduction
xcessive thoracic curvature or hyperkyphosis deformity is a prevalent postural abnormality and a major factor of upper quarter pathologies [1]. The prevalence of vertebral column anomalies is about 32% and 60% among the adults and the elderly people, respectively [2]. Rajabi et al. (2010) reported a higher rate of hyperkyphosis anomaly in men [3]. Other studies reported the prevalence rate of 15.3% in children aged 11 years [4], 38% in people aged 20-50 years, and 35% in those aged 20-64 years for hyperkyphosis anomaly [5, 6].
The normal thoracic kyphosis angle of the Iranian population has been reported 42° in people aged 18 to 30 years by Rajabi et al. (2008); angles higher than this are considered as hyperkyphosis [3]. Hyperkyphosis negatively affects the physical condition and the quality of physical activities [7, 8]. Individuals with hyperkyphosis walk slowly and have difficulty in climbing stairs. The risks of falling, fracture, and mortality are higher in these people, because of imbalance and the increased level of the general oscillation of their bodies [7, 9]. This anomaly disrupts respiratory functions and daily activities, too [9]. Hyperkyphosis increases the biomechanical stresses applied to the vertebral column, the risk of osteoporosis in the vertebral column, and the compression fractures of the vertebrae [10, 11]. Katzman et al. (2016) studied the relationship between hyperkyphosis and the prevalence of spine fracture. They reported that the prevalence of spine fracture increases by 22% for every 10° increase in kyphosis [12].
Hyperkyphosis anomaly is treated and corrected through various methods, including manual therapy [13, 14], postural re-education [15, 16], using taping and orthoses [16], surgery, and therapeutic exercise [6, 17]. Therapeutic exercise is a common method. To manage kyphosis anomaly in patients, specialists often prescribe local therapeutic exercises, and recently, comprehensive and spine strengthening exercises [12, 18].
Sheikhhosseini et al. (2018) conducted a review study to examine the effectiveness of various corrective exercises for forward head posture anomaly (an upper-crossed syndrome anomaly). Results revealed desirable effectiveness of interventions for reducing the angle of forward head posture, but no specific finding has shown the effectiveness of these exercises for the related pains. The authors have recommended further studies to elucidate this matter [19].
According to the theoretical findings, there is a mutual relationship among postural anomalies in the upper quarter region. In other words, postural anomalies increase the incidence of kyphosis anomalies. This condition can cause changes along with the head and neck of people with hyperkyphosis [20]. According to Vladimir Genda, this anomaly is closely related to the other parts of the body in the form of a chain reaction and the separate local correction of each part cannot be scientifically justified [21]. Therefore, corrective exercises must be developed and implemented to manage the problems of patients with this anomaly. These exercises include strengthening the vertebral column, increasing the mobility of the vertebral column, and improving the alignment of the vertebral column, simultaneously.
Muscular tightness and the stiffness of connective tissue are common musculoskeletal problems that may emerge due to diseases, strokes, lack of physical activity, or scarring. The reduced flexibility of the soft tissue and motional restriction can alter movement patterns and cause musculoskeletal anomalies [22, 23]. Many methods used for maintaining the flexibility of muscles emphasize different stretching exercises [24]. Other techniques that are vastly employed for improving muscle flexibility are heat [24, 25], massaging [26], proprioceptive neuromuscular facilitation [27], muscle energy technique [28], and Myofascial Release (MFR) technique [29].
MFR technique is a manual technique used by the experts or the patient (self-myofascial release) to affect the fascia. Although it is not yet clear how these techniques work, their therapeutic effect has been clinically proven [30]. These techniques cause limited fascia stretching. Mild pressure for 90 to 120 seconds in the tissue increases flexibility in the limited tissue and the first release occurs afterward [31]. Tangible changes exist in the tissue structure and the end feel, that become palpable to the touch by the release of the superficial fascia. Next, the specialist applies more continuous and stable pressure without applying force downwards and towards the next resistive obstacle in the depth of the tissue, takes the tissue to a new range, and maintains it there; after some releases, the tissue becomes softer. The effects claimed for MFR techniques are similar to those reported for massing and soft tissue mobilization, including a change in blood circulation; the dilation of capillaries; and the stimulation of the nervous system, skin temperature, and metabolism. These changes increase the dilation and flexibility of the soft tissue, cause muscle relaxation, and reduce spasm and pain [30].
As noted before, a major complication of hyperkyphosis is stiffness or tightness created in the muscles of the segments in the vertebral region. If tightness and stiffness are resolved, the anomaly correction process will be facilitated and become more efficient. If this method is prescribed with an acceptable corrective protocol, it will have better results. The literature review showed that no study has examined the effectiveness of the simultaneous use of therapeutic exercises and MFR techniques for anomaly correction. Therefore, the present work aimed to examine the effectiveness of an 8-week protocol comprising corrective exorcises with and without MFR. This study aimed to answer this question: which method is more effective for correcting hyperkyphosis? Moreover, the persistence of the effects of these methods is examined and compared after four weeks of follow-up.

Materials & Methods
This was a clinical trial examining the effect of corrective exercise protocol with and without MFR on hyperkyphosis in the experimental and control groups. The statistical population comprised non-athlete university male students with kyphosis postural anomaly (≥42°) aged 18 to 28 years in the Islamic Azad University of Zanjan, Iran. These students were identified by colleagues in physical education classes and introduced to the researchers. Then, based on the inclusion and exclusion criteria, the researchers selected 45 eligible participants and assigned them randomly to three groups: Corrective Exercises (CE), Corrective Exercises with MFR (CE+MFR), and control.
The inclusion criteria were as follows: the kyphosis postural anomaly of more than 42° measured by a flexible ruler, the forward head of more than 46°, the forward shoulder of more than 52° measured by imaging method, the age range of 18 to 28 years, and giving informed consent for voluntary participation. Also, the exclusion criteria were as follows: A history of fracture, surgery, or joint diseases in the vertebral column, shoulder girdle, or pelvis; the lack of lower cross syndrome; the lack of regular physical activity; joining a championship or sports teams; having special occupational conditions (which could exacerbate kyphosis and prevent postural correction at the workplace). The participants who were unwilling to continue the exercises, absent in two consecutive exercise sessions, absent in three sessions of the 8-week exercise program, and absent in measurement sessions were excluded from the study.
Initially, the participants were selected based on the inclusion and exclusion criteria. They signed the informed consent form and were randomly (by balloting) assigned to three groups (CE, CE+MFR, and control group). Then, they participated in the pre-test stage where the study variables (ie, kyphosis angle) were measured. This measurement was performed using a 50-cm flexible ruler (IDIO). First, two spinous processes (T2, T12) were determined as the beginning and end of the thoracic kyphosis curve, then, the measurement was performed while the participants were in a standing position.

All the participants in the experimental and control groups were evaluated and their kyphosis angles were measured by a flexible ruler in the post-test stage (with the same procedure used in the pre-test). In each session, the corrective exercise group performed warming-up exercises while the hybrid group was receiving the MFR technique. After four weeks, the participants were again evaluated to measure the persistence of the effects of exercises on the follow-up.
The obtained data were analyzed using descriptive and inferential statistics in SPSS-20. After ensuring the normality of data distribution using the Kolmogorov-Smirnov test, the repeated measures Analysis of Variance (ANOVA) was used to specify within-group variations, and the Analysis of Covariance (ANCOVA) was employed to specify between-group variations. The test results were evaluated at the significance level of 95% (P<0.05).

Results
Table 1 presents the demographic information of the study sample. The results of the One-way ANOVA showed no significant difference among the three groups in terms of height, weight, and BMI (P>0.05); thus, the study groups were homogeneous.

The Standard Error of Measurement (SEM) was calculated to compute the reliability index of the kyphosis angle. The SEM is an index for the precision of measurement, the stability, and the reliability of the test. It shows the distribution of the repeated measurements of one person with the same device around the actual score [33]. To this end, the kyphosis angle of 15 people was measured three times with a 3-day interval; the SEM calculation represented the measurement precision of 0.6°.

Ethical Considerations
Compliance with ethical guidelines
This study has been approved by the National Ethics Committee of Biomedical Research (Code: IR.UT.SPORT.REC.1397.004).
Funding
This research did not receive any grant from funding agencies in the public, commercial, or non-profit sectors.
Authors' contributions
All authors were equally contributed in preparing this article.
Conflict of interest
The authors declared no conflict of interest. 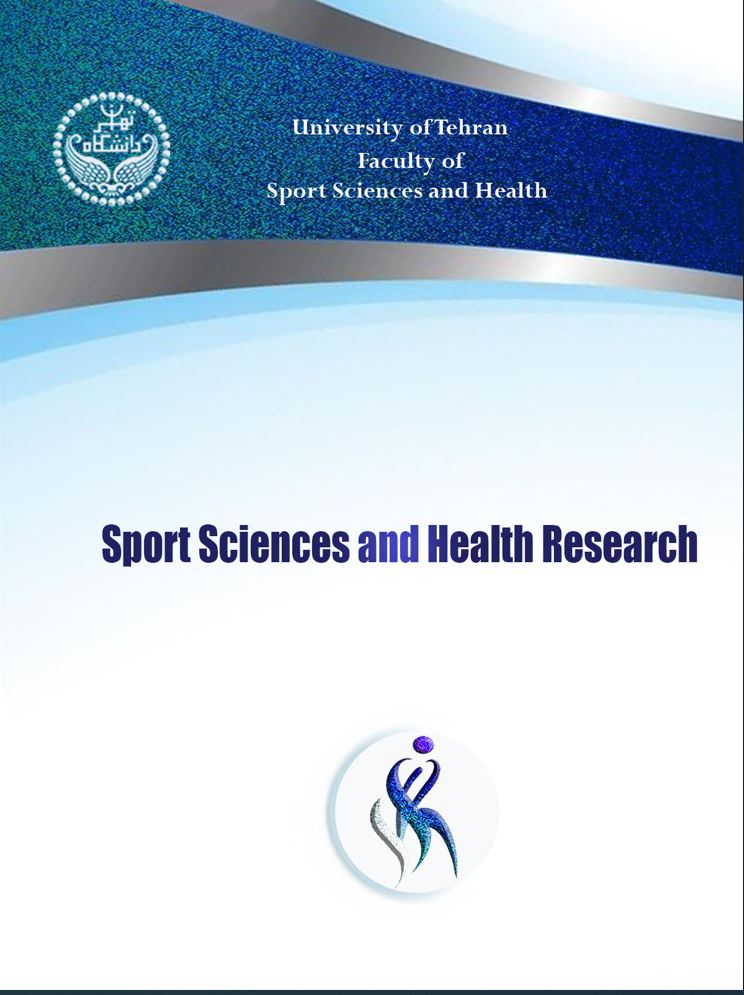